The big project of the week has been to design and loft up the drawings for the new rowboat. This boat is being principally inspired by the Bailey Whitehall in the Mystic Seaport Museum, and also be Rangeley Boats.

It is very common these days to use computer software to design boats, and I have software to use for that. I still prefer to draw these boats out full scale so that I can get a really good feel for the shapes. You just can't see it the same way on the computer screen. I may still import this design into the lofting software one day.

So I drew out this boat with the stem and transom of the Bailey, but with almost the width of the Rangeley. I used the entry and exit shapes of the Bailey and a midsection that came close to the Rangeley. Then I had to connect the dots, as it were, to make everything flow together into a nice boat shape. Easy to say, difficult to do! 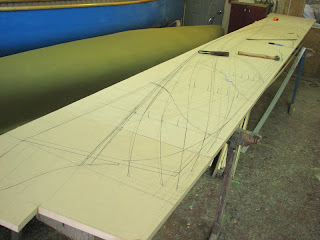 So I thought a half hull model would help. It would, too, but I got the drawings figured out. Traditionally, the half hull is carved first, then it is used to arrive at the sections for lofting, not the other way 'round! 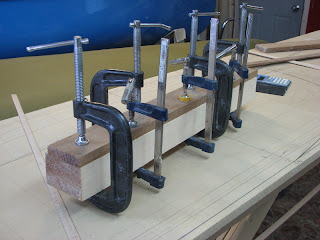 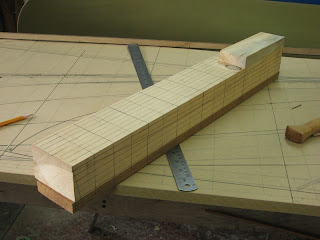 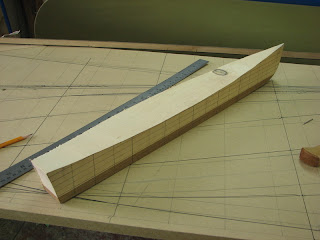 Labels: half hull model, lofting, Rangeley, rowboat, Whitehall
Ah, the 'cello and the bass viol together. 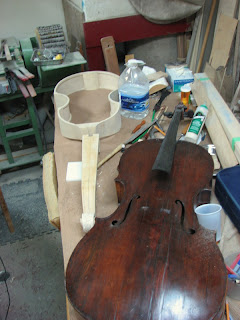 Labels: 'cello, Viola da Gamba
There were more than a few spots on the 'cello's top that were questionable so I ensured that they were held secure. The traditional repair is to glue on, with hot hide glue, little squares of spruce whose grain runs across the split, then to bevel each side into as kind of little roof shape.

It is easy to see just how extensive the previous repair were! Rest assured that this 'cello sounded awesome even with all of those repairs, and I expect to still sound awesome once I am done. 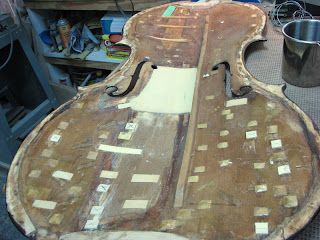 This is the area which caused the initial concern. The spot to the the side of the end block had a some serious splitting occurring, as well as poor adhesion to the back. There was a piece of linen glued to the rib which was holding it from further splitting, but it wasn't doing anything for the rib to not buckle as it was. I replaced the cloth with some vertical pieces of spruce and increased the bonding area to the back by using dentellones. The original lining in this area was significantly damages and not doing its job at all. Dentellones are the traditional means of joining classical guitar tops to the sides. If somebody down the road doesn't like my choices then this can all be reversed without much fuss, which is precisely the reason that luthier still use hot hide glue!

Besides, I'm not this first one to work on the inside of this instrument... 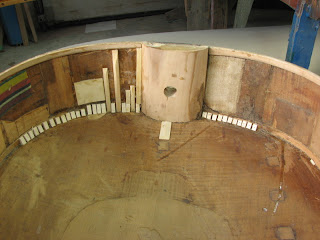 I had a couple of violin repairs to do recently, too. This one is a little 1/2 size fiddle. It came in because of a series of unfortunate events. Awhile back the child's music teacher noticed that the string action was kind of high and mentioned this to the father. The father talked to one of the other dads at the class, who mentioned that he had just sanded down the top of the bridge. Well, this dad sanded down the bridge quite a lot! Probably a good 7-8mm. Unfortunately this still did not solve the problem. The bridge had been sanded down down so far that there was no more wood left to sand.

What everyone had failed to notice was that the real problem was that the violin neck had been knocked hard enough to break the glue joint at the button. This had released the back's ability to hold the neck in place, and the neck was now being folded forward! As it moved forward the strings would lift up, etc., etc..

So I re-glued the heel of the neck to the ribs and to the back. Now nice and solid I brought the strings back up to tension and quickly realized that they were bottoming out on the fingerboard. Why? Because the bridge was now way too low from being sanded down! So a new bridge is to be fitted. 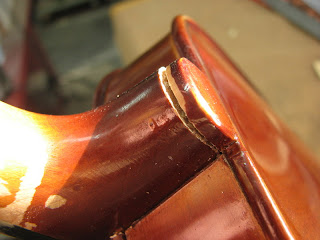 Work has progressed on the scroll carving on the viola da gamba. Progressed, but slowly. This is intricate work as the wood grain is constantly changing as the carving wraps around the scroll, and there is not much space to work in.

Once all of the background is done I can work start the relief work. I was anxious to get started on this carving, now I am anxious to be done with it! After the relief carving is done, then I will be able to carve the scroll itself, then I can hollow out the pegbox.

THEN I can continue on the back and belly. 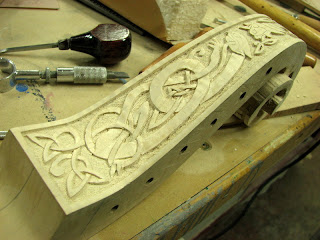 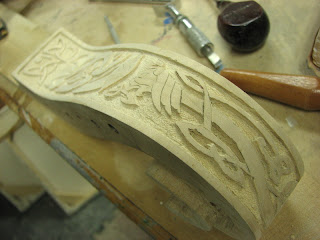 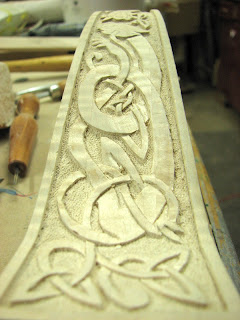 Labels: lutherie, Viola da Gamba
While the shop is set up for lutherie I am finally getting to the repair of my wife's 200 year old 'cello. This old instrument is a Czech made copy of a large body Amati 'cello. 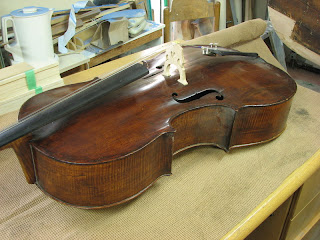 A real problem area is the lower bout. There is some cracking in the wood, the belly and back plate are experiencing chronic glue failure, and this particular section is actually bending outwards. 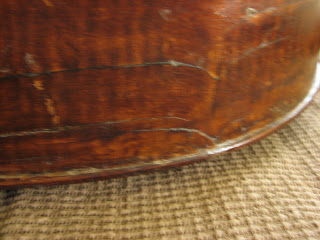 With the top off I can examine the 'cello in its present state. Oh my... 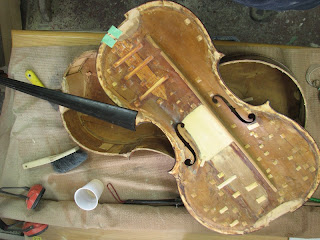 It appears to have at least three sessions of work done previously. I judge this by the apparent age of the different repairs. This would help explain the chronic glue failures, each time the top was removed new glue was applied over the old glue. You can do this with Hot Hide glue, but as the glue builds up the surface areas tend to get smaller. Pretty soon you have very little glue holding it all together. This is supported in my mind as many places required very little effort open the glue joint. Too little effort. 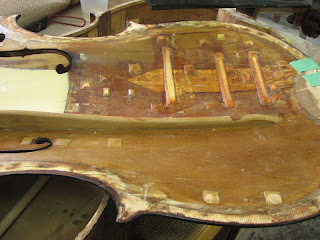 There were some odd repairs done over the years...what is up with that multi-colour fabric? 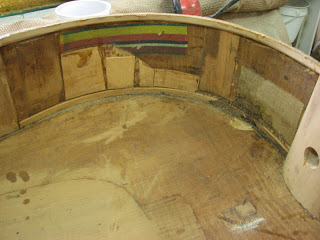 Labels: 'cello, lutherie
The racing canoe is done and looks great compared to what it was like when it first came in. Now I just have to wait for the owner to come and get it. Its not convenient as he lives in Cross Lake Manitoba. That's a good 9 hour drive, at least, and you can't use just any car for a canoe this large. 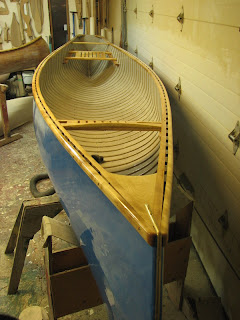 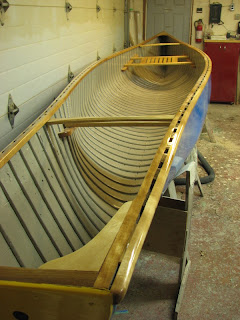 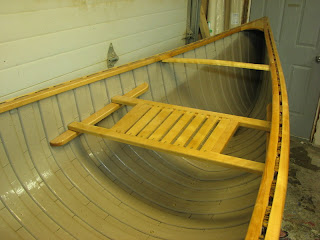 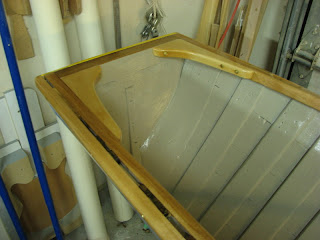 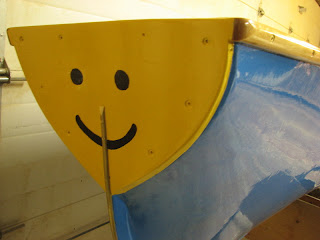 Labels: Northern Racing Canoe, wood and canvas canoe
I have taken on the sale of three canoes on commission. These three canoes are all built by Morris Elliot of Kanaka Creek Canoes in British Columbia, and date from 1996-97. They are all in very good condition and can be used "as is" for quite some time before any work will be required. The varnish and canvas is getting a bit old, the woodwork is in very good condition.

They are all built to the same design, which appears to be the Atkinson Traveler. They are 17'6" long.

This first one is very interesting in that it has some references to traditional birch bark canoes.

An interesting side note about these canoes is that they were used on an extended canoe trip last summer from northern Saskatchewan to Baker Lake, Nunavut. 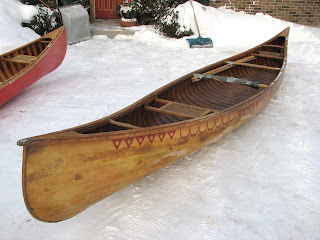 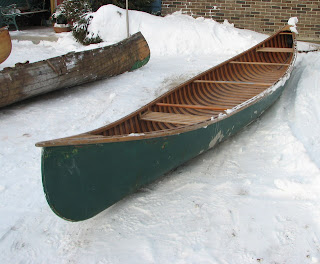 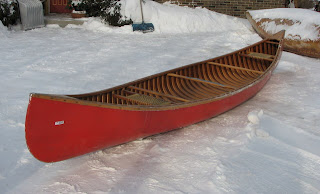 Labels: Morris Elliot, wood and canvas canoe
The new guitar is all done! I had it finished a few weeks ago and it has been settling in. I'm really liking it, my best ever. I had the guitar over to a local musician, a classical guitar musician who is a prominent guitar teacher and president of the Winnipeg Classical Guitar Society. He really liked it. My client will be the most important one to please, I am pretty confident that he'll like it. 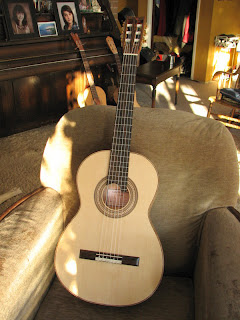 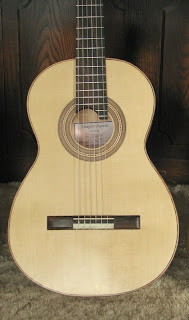 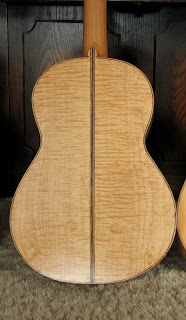 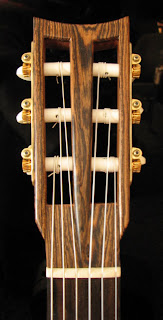 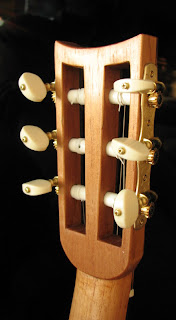