One of my clients, the fellow who is ordering the oars shown in an earlier post from February, sent me a DVD of the canoe races held in Cross Lake, Mb.  The races are held as part of the Cross Lake Treaty & Indian Days and are formally called the Douglas Monias Sr. Memorial Canvas Canoe Marathon.

I've been told that the race is 30km/day for three days and that the crew need to change positions, bow & stern, at the 15km mark.  A good amount of prize money make the races hotly contested.

You can see that these converted freighter canoes are made much narrower than originally built, and that proper rowing requires an outrigger fitted for the oarlocks to be set far enough apart.

A few photos captured from the DVD.  I apologize for the image quality, but whatever camera was used produced a pretty coarse image.  I had to screen capture the images and then tweaked them to get a reasonable image. 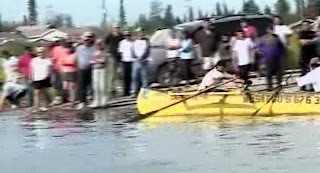 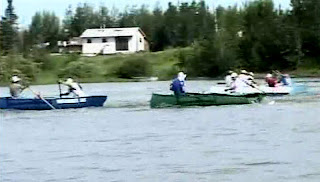 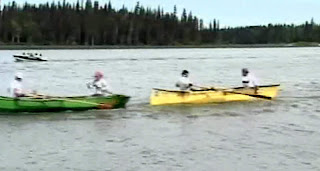 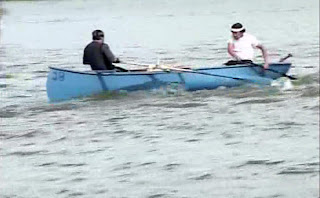 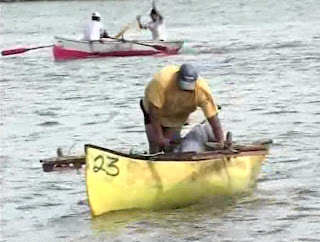 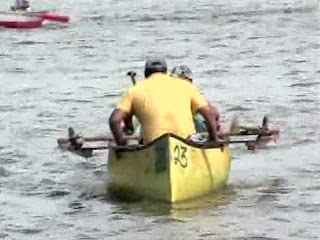 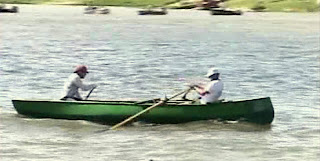 I received an order in February for a new Freestyle paddle.  This order is from a previous client.  I particularly appreciate orders from previous client as it is a real expression of support.  Anyway, this order specifically used the word "distinctive" as a design criteria.

So, I took the opportunity to try a couple of things that I've been wanting to try out for awhile.  This paddle is using a white cedar shaft core and blade, walnut shaft facings and grip, and a walnut blade border incorporating a kind of herringbone pattern within it. 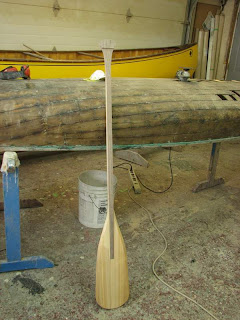 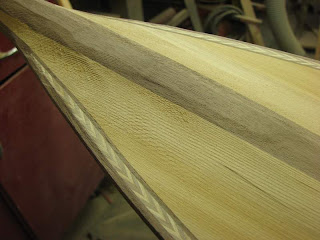 Labels: freestyle, paddle making
The Brigden is out of the shop now, and the next canoe is in.  This time it is an old Chestnut "Bob's Special".  A particularly unique aspect of this canoe is that it is the first canoe that I every worked on professionally back in 1987.  Well, its back.

Starting off is to strip out the old and tired varnish from the interior, then open it up for rib repair.  There are about a dozen broken ribs.  Which isn't surprising, really, as the "special" part of the name "Bob's Special" refers to an ultralight weight approach to building.  Most notably are the very thin ribs, about 1/4" thick, and the every thin inner gunnels.  They still used maple for decks, seats, and thwart!

Once the rib repairs are closed up its time to sand the interior for varnish. 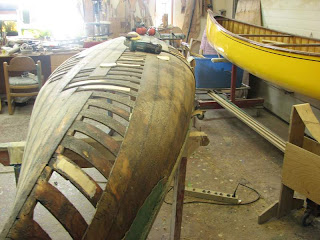 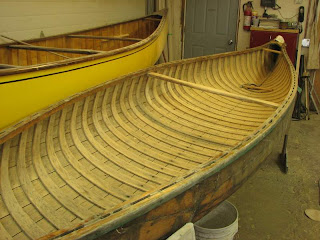