The following text has previously been published in "Canoe Journal".  I forget the exact date, but about 2000-2001.


My shop phone rang early Monday morning, “Hi, This is Vanessa from Frantic Films; I was given your name by Frank at Wilderness Supply…” I receive quite a few calls that begin that way. This one would prove to be very different.

Over the last two summers Frantic Films, based in Winnipeg, have produced shows for History TV; reality TV shows which bring to life historical events. First was "Pioneer Quest", in which two couples homesteaded for one year (not the wimpy PBS version that stole the idea), in as authentic as possible manner, pioneer life circa 1870. Last year they did "Quest For The Bay", in which a crew took a York boat with full cargo, using only what would have been available at the time, and eating only what would have been eaten on the trip (how many ways can you prepare Pemmican?), from Winnipeg to York Factory, on the shores of Hudson Bay, following the historic Hayes River route.

This year they are doing "Klondike, Quest for Gold".

The company's name, Frantic Films, should have given me a hint about the resultant situation. I went from initial phone call on Monday May 6, to having a contract on Friday afternoon to build a 20' sectional canoe based upon the offerings of the Dean Canoe Co. of Toronto, circa 1879-97.

Sectional canoes were developed by Walter Dean; at least he held the patent for them. The bow fits inside of the stern, and together they nest inside the center section, making a smaller package for shipping, and smaller components for portaging. 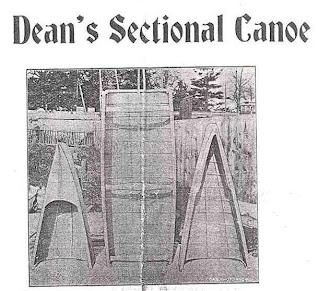 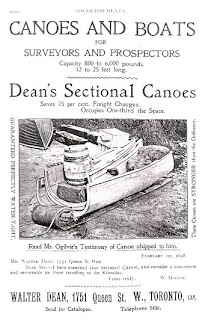 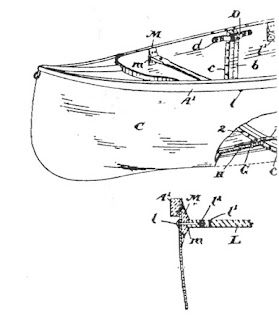 They had wanted two boats, but there was just no time, they needed to be in Whitehorse for June 5th. This meant that I had three weeks to design and build an “interpretation” of the canoe. In the end we decided that I would build just one of these sectional canoes; better to do one well and on time than to get screwed on two.

So, now I had a contract, but who was I going to get to work for me? Money was not a problem, the film company said, “Could you finish it faster if we gave you more money to hire more people?” Sure, but who was skilled enough to walk into the shop and start work with no new training, and who was willing or able to start right away? This alone would determine whether I could accept the job or not. Some projects in life just work out as though they were meant to be. In the nick of time, I managed to find two people that I could trust to work well, and just as importantly, who could start Monday morning.

There were no plans available, and no time to find any. It would have been a lot easier if I had been supplied with a set of plans. As it was, all I got was a skimpy patent office drawing, and a couple of photocopies of very old catalog photos! I basically had to design it as I went along.

I had worked on restoring a number of old cedarstrip canoes, so I was familiar with the basic hull shapes and trim detailing that were typical to this form of construction. So, while my helpers set up shop and collected the needed materials, I set up the lofting table and drew up the plans. While they prepared the material, I built the mold. Both tasks were finished at the same time, as if on schedule. And so it continued everything just in time.

Frantic had wanted an “exact” replica of the original sectional canoes. Theoretically this would have been possible to do. However, no one is set up to build this sort of canoe using original methods and materials anymore as a production item. To do an exact replica would have taken more time to set up for authentic building methods. I determined that I would build a hybrid canoe, one that looks and operates as much as possible as the original, while using some modern materials and methods. I built the cedar hull “stripper” fashion, using a simple mold, and fiberglassing the exterior. After the inside was sanded smooth, I installed an inner keelson, and then steambeant in Oak ribs, which were clench nailed to the hull as the originals would have been. The rest of the trim was installed, following the original as much as possible. With one exception, the original would have been a rib and batten construction, the battens backing up the planking seams on the inside. I ran out of time and left the battens out. The boat was painted grey on the inside and outside, and the trim was left natural, with only an oil finish applied. 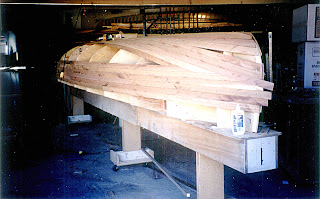 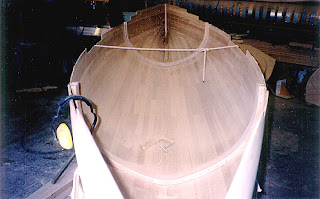 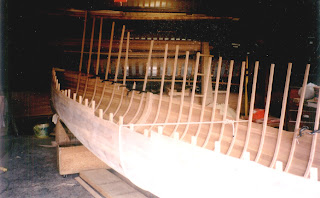 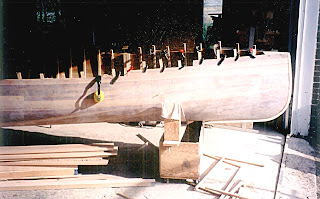 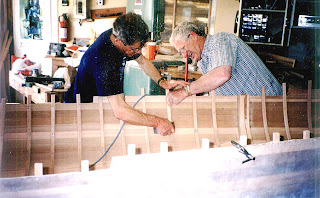 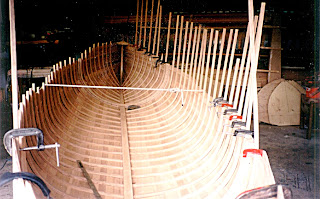 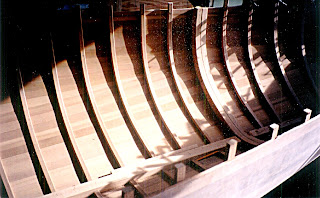 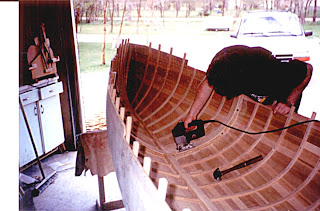 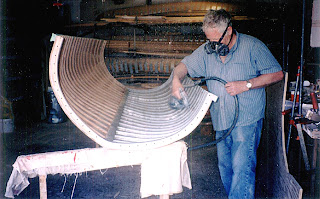 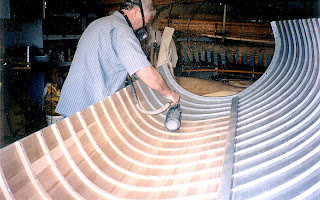 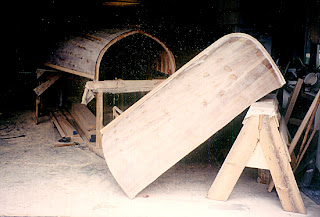 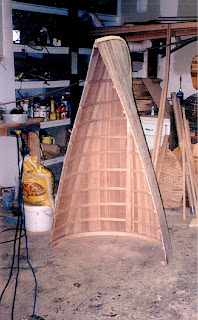 While some may criticize my choices, I feel that given the time constraints and available technical information, my choices were all justifiable.

So, I got the job done and paid some bills. The canoe was picked up by a guy driving a Jeep Cherokee. He was shaking like a leaf, stressed out over not being able to get the canoe back to meet the truck that was taking it North. After a bit of head scratching, we put the ends into the back, and tied the center section on top, and off he drove. From Whitehorse, it was taken to Skagway Alaska to begin its trip over the Chilkoot pass and then down the Yukon River to the Klondike gold fields. 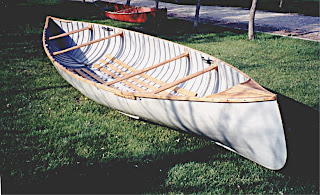 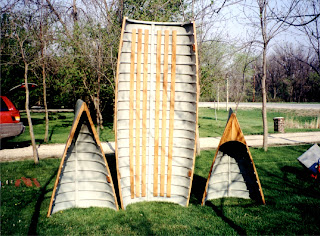 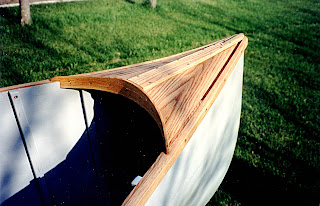 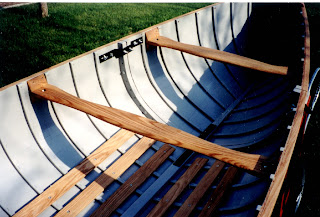 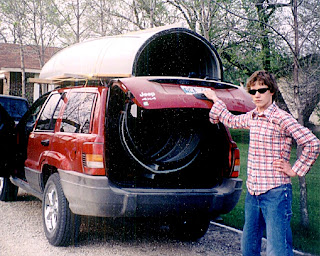 The canoe performed very well, according to reports, and now resides in the Dawson City Museum.

I never did receive any in the field shots of the Sectional Klondike canoe that I built for Frantic Films' "Klondike: Quest for Gold", nor did I ever receive a DVD of the series, so I lifted these ones from some clips posted on Youtube. I apologize in advance for any copyright infringements, but this IS my canoe. 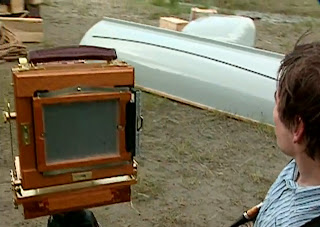 The canoe in sections, sitting in the background waiting to be portages somewhere. 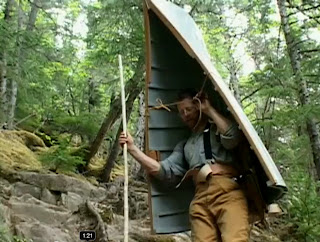 Hauling the stern section over the Chilkoot Pass from Skagway Alaska into the Yukon. 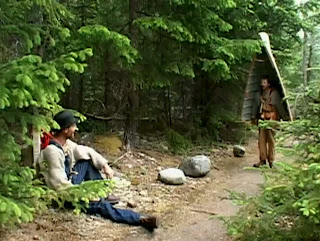 A welcome, and needed, break along the portage trail. 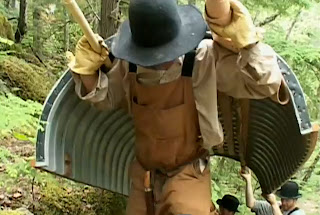 Hauling the center section was much more of a challenge, but still, portaging a 20' canoe over the mountains is no easy task no matter how you look at it. 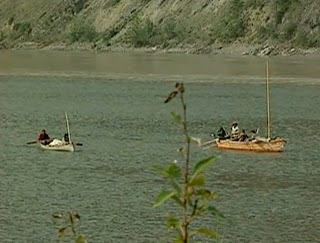 The flat bottomed scow was pre-built and waiting for the team as they reached the Yukon river.  I bet that they are glad not to have had to build it themselves after such a labour. 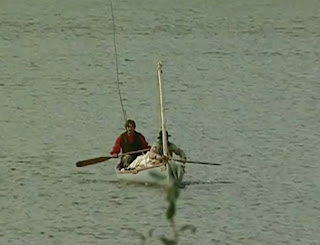 Paddling along the Yukon river is a relief from hauling everything over the mountains. 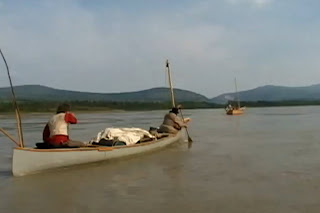 Near the end! The team is approaching Dawson City, Yukon.  Time to start looking for gold!

Since building this canoe, I had a chance to see a 1910 Lakefield “Klondike” canoe in the Canadian Canoe Museum in Peterborough Ontario. I was very pleased to see just how similar it was to the canoe that I built. Obviously, there were some differences, such as Cedarstrip construction instead of rib and batten, and bright varnish instead of workboat grey paint. I was also three inches longer, but the essential shape was the same.

I am so impressed with how you made that canoe. I wish I could also ride on a canoe, but I think it's not as exciting as Gatlinburg rafting.

i also am building a three piece canoe but not as fancy as yours mine is more of a need.What i mean by that is i have no place to put a 14 foot canoe so i cut a 14 foot sportpal in three pieces

Their team’s rapid development, cost-effective work, and adherence to project requests are hallmarks of their work. more privacy