Yesterday was Remembrance Day. I took the day of work. After attending the community commemorations, and after completing the day's chores, I decided that this was as good a day as any to finish converting the big aquarium in the house over to the Natural Planted Tank approach that I have become such as fan of.

Step one, make space to work.

Step two, take down and clean the tank. 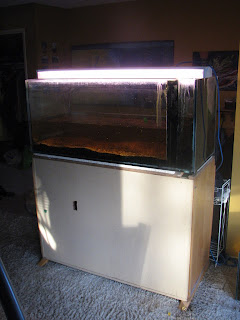 Step three, clear out the stuff by the window for where the tank will go and put the new stand in place. I wanted a clean and simple stand, and shorter than the existing one. 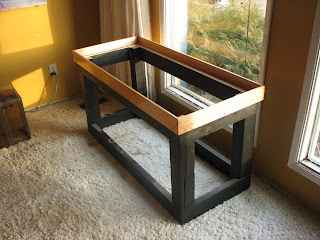 Step four. Put the cleaned tank in place and start putting garden soil in. About 1" depth is what is desired. 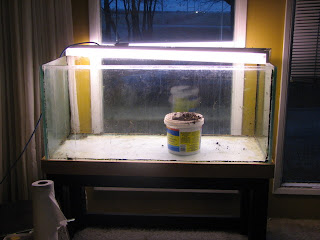 Step five. Some time ago I found this really cool driftwood stump along the river outback and brought it home in anticipation of finally using it. I've had it soaking for about two months now. 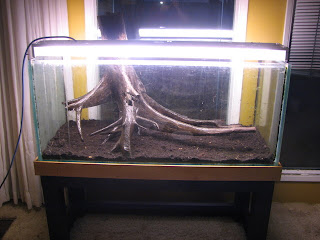 I stole some of the plants from the shop tank and planted them in the soil, then put in about 1" of gravel over top of the soil. I saved a good bunch of water before striking the tank, and put it back in. Then the fish go back in. Mature water and wood and plants fully colonized with bacteria equal a nearly fully cycle tank, so this works OK.

I still need to do something about the lamps. I haven't finished my decision about that. I want something that will leave the top of the tank open for access and to allow for emergent plant growth. 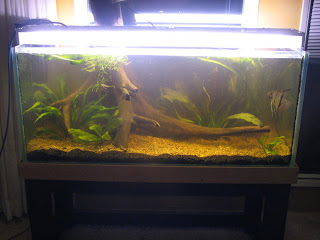