Now is the time to make some decisions about the trim.  One of those decisions which really affects the character of the boat is the deck.  Large, small, wood, etc. all have to be considered.  In the end, for this boat, I chose to be influenced by the decks of traditional cedarstrip canoes built in the Peterborough style.
This style has single large panels of wood with the straight grain oriented to the gunnel and joined along he center.  This center seam is capped with a tapered piece of wood, and there is a subtle coaming over the end grain. Due to the size of these panels I decided to add some cross grain reinforcements...just in case. 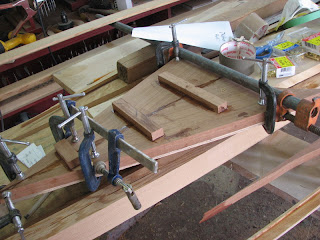 This is the coaming being laminated.  I could have used steam bent wood, but it would take more time to get the steam box set up and up to steam than it would take to simply rip a few thin strips and glue them up.
Lots of clamps ensure that the clamping pressure is evenly distributed. 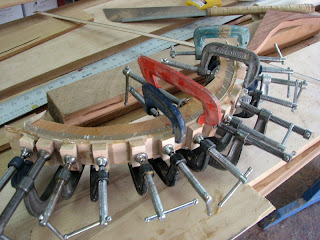 Main deck sections are installed.  The outer gunnels are also clamped in place at this point. 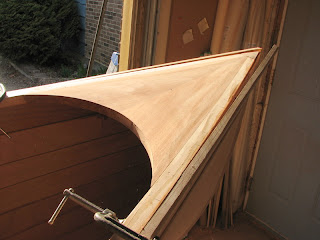 An overview of the boat with the trim being installed.  There are a lot of pieces and the each need to be fabricated and fitted individually. 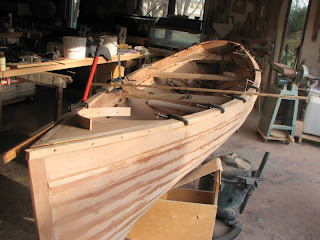 Rear seat slats in place.  The original Bailey Whitehall has the side slats very long and resting in the first thwart/bench seat.  I assume that is for sailing, it looks great that way but makes a much more complicated build.  Most boats have the stern seat slats of more or less equal length.  The solution that I decided to use gets the best of both worlds. 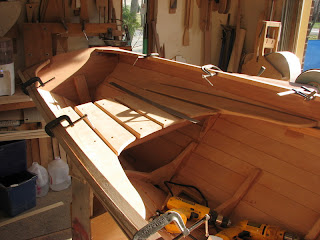